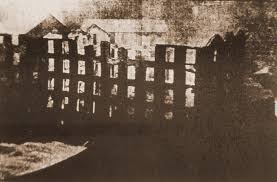 on the surrounding cliffs and edifices and watched the progress of the fire, while others were engaged in trying to save what they could…”

Today it seems improbable that so many people could watch a Shepton Mallet fire, but they did, apparently. It happened on 10th January, 1843, before the arrival of the railways when most local people still worked on the land; today, in winter when leaves are absent from trees, the cliffs can be seen rising above the water treatment works on both sides of the modern road. Thomas Pratt’s story, published in a newspaper here fifty years later, long after he’d emigrated to Australia, is a rare example of a first-hand account not just of the fire, but also of the way the mill was organised, the machinery it contained as well as a precious few snippets about the people who worked there.

Thomas was employed there from the age of seven and although he was considered a good hand, he didn’t like the work. He worked largely on the fifth floor and in the attic rooms at the very top of the buildings, variously serving the spinning machines or as a general labourer. After six years or so at the age of twelve or thirteen, he left to learn the trade of a mason in Wells, staying for some time until the trade became bad – perhaps due to lack of work – and he returned to work again at the mill.

The night of the fire was bitterly cold and the children’s supervisor, Sarah Hiscox, asked him to clean out the flue so that heat could come up from the fire on the ground floor to the upper floors more freely. This he did and shortly after heard an unusual noise from the floor below coming through a grating in the floor. He peered through and heard Sarah telling the children to run for their lives as the factory was on fire. A cloud of black smoke came through the flue and Thomas shouted the alarm to the other children working in the attic. There was a great rush for the stairs. Realising that he didn’t have his hat, he returned to where he had been working and retreived it from under a basket of bobbins which he upset over the floor. The stair was now clear and he leaped down half a flight at a time. Arriving two floors below, he remembered his mother worked in one of the rooms, so he opened the door and was enveloped in a cloud of smoke. He shouted as loudly as he could, but decided the women had already run for their lives.

Two more floors below, he came across two women obliviously trying to take a basket of bobbins up the stair and completely blocking it. He shouted for them to make way, but they refused, seemingly unaware of the danger and threatened to report him to the boss. With other workers now behind him, he vaulted onto the basket and tumbled headlong onto the stairs beyond, upsetting both the basket and the women. Not stopping to talk any further, he exited into the yard followed by the remaining children and women and found both his mother and his sister safely there. He never knew how the alarm was first given, but it was a miracle that the great number of small children got out safely.

It was only a little while before huge flames burst through the upper windows front and back. Two water engines from Shepton poured a stream of water into the burning building, but it had no effect. During it all, the big water wheel incongruously continued to turn until many hours later, around two in the morning, the side walls fell in, leaving only the gable ends standing.

In the next blog we’ll take a look at the aftermath of the fire.