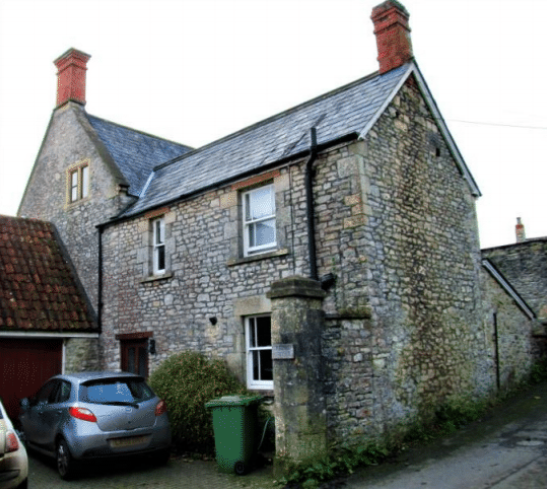 Today, Studfold Cottage is simply a family home, but it has a fascinating history and a cellar.

Likely built in the 17th century, the house was originally part of the Strode estate centred on what is today called Old Manor and is one of a number of buildings on the main route between Shepton Mallet and Croscombe before the modern road was built in the mid-19th century.

The property has had a number of names starting with Roseland Villa, becoming The Butcher’s Arms public house by the time of the 1841 census, reverting to Roseland Villa before 1847 and finally becoming Studfold Cottage in the 20th century.

The Butcher’s Arms is a common pub name and although there is no evidence that it was ever licensed as an inn, the 1830 Beer Act allowed home occupiers/owners to sell beer, cider and perry from their premises. As a result, rooms in houses and cottages rapidly opened as alehouses serving in this case, the many workers at the silk mills at Darshill and Bowlish and local residents.

Interestingly, there is a historical association of a butcher’s premises with inns and alehouses. Not only was there a ready market for the meat but bull baiting regularly occurred in the surrounding courtyards and there was an archaic belief that meat from a baited animal was of higher quality: let alone providing entertainment in the process! In many rural alehouses the keepers were primarily farmers and butchering was part of the job.

In 1839 – 41 Isaac Gould a retired Army veteran injured at Waterloo lived next door to The Butcher’s Arms (now Roseland Cottage). He may be the butcher and grocer of Bowlish listed in the 1848 Hunt’s Directory of businesses and people.

There is no record of whether the Ham/Bowlish pub had a sign, but this Cotswolds example gives a flavour of the linkage between drink and meat.