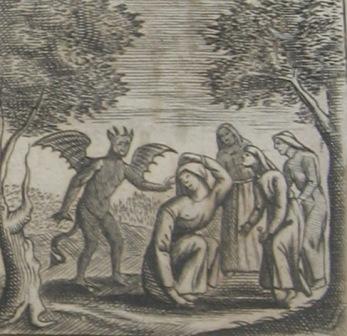 Following yesterday’s post on 16th and 17th century Christmas, here are a couple of contemporary stories for you to enjoy.

The Lord of Misrule

‘Francis Saunders was charged that there having been in his house at Blatherwick at Christmas time, a lord of misrule, he and others had appointed that the lord of misrule must have for a lady or Christmas wife, one Elizabeth Pitto, daughter of the hog-heard of the town; whereupon, the defendant, putting on a gown and a shirt or smock or surplice, read words set down in the form of marriage in the Book of Common Prayer, putting a ring upon the finger of the woman, and going through the rest of the ceremony, and afterwards, at night, putting the parties into a bed together. Defendant was also charged with being a swearer and a drunkard‘

Joan, Margaret and Philippa Flowers were ‘known to be herbal healers’ and came from a local family which ‘had fallen on hard times’. They accepted employment as servants with the 6th Earl and Countess of Rutland, at Belvoir Castle near Grantham, Lincolnshire, but the sisters, and their mother, were unpopular with the other staff, and there were suggestions of theft, and misdemeanours. All three were dismissed and only Joan was given a payment of severance amounting to ’40 shillings, a bolster (pillow), and a mattress of wool’.

After the sisters were dismissed, the Earl and Countess fell ill, suffering from ‘vomiting and convulsions’. Their son and heir, Henry, Baron de Ros, died, and was buried on 26 September 1613. Their younger children, Francis, and daughter, Katherine, suffered similarly and Francis also died and was buried on 7 March 1619.

It was five years after the Flowers were dismissed from Belvoir Castle, and following the death of their second son, Francis, that the Rutlands had the Flowers arrested before Christmas of 1618/9. After initial examinations, the women were taken to Lincoln gaol.

When arrested Joan Flowers professed her innocence. She was not known to be a Church-goer but en route to the prison at Lincoln she asked for bread as a substitute for the Eucharist. She had claimed that something so blessed could not be consumed by a witch, but she choked and died after the first bite.

At Lincoln, Margaret was to accuse her mother of witchcraft, while Phillipa admitted to witchcraft on behalf of herself, Margaret and Joan. The sisters said they had entered into communion with familiar spirits that had assisted them with their schemes. The mother’s familiar was a cat named Rutterkin. The women admitted that they stole the glove of Lord Ross and gave it to their mother, who had dipped it in boiling water, stroked it along Rutterkin’s back, and pricked it. Combined with some incantations this supposedly caused Lord Ros to become ill and die. An attempt to harm Lady Katherine, the Earl’s daughter, had failed when it was found that Rutterkin had no power over her. The women had also taken some feathers from the quilt of Rutland’s bed and a pair of gloves. By boiling these in water mixed with blood they cast spells to prevent the Earl and Countess from having any more children. Both women admitted to experiencing visions of devils and that their familiar spirits (like a possession) visited them and sucked at their bodies.

Margaret and Philippa Flowers were tried before Henry Hobart, Lord Chief Justice of the Common Pleas, and Edward Bromley, a Baron of the Exchequer, and found guilty. They were hanged in Lincoln castle on 11 March 1619.

The Earl and Countess remained so convinced that their son had been killed by the effects of witchcraft that they had it inscribed on their monument at Bottesford church. It reads, in part:

“In 1608 he married ye lady Cecila Hungerford, daughter to ye Honorable Knight Sir John Tufton, by whom he had two sons, both of which died in their infancy by wicked practises and sorcerye”