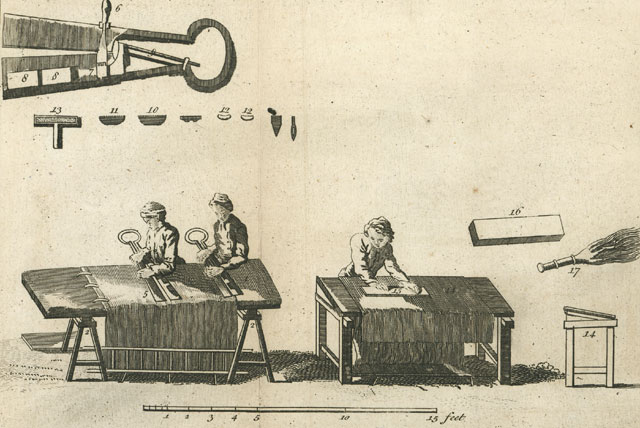 This is the last in this series of blogs about the main stages in the production of woollen cloth – the material which transformed Shepton and made it the wealthiest town in the whole of Somerset in the early 17th century.

Once tentered and dried, the piece of cloth needs to be finished. This process involves raising the nap of the wool by brushing it with a teasel comb and then close cutting it to give the fabric a softer feel than plain woven cloth.

The teasel, of course, is a plant which grows throughout the country and clumps of it can still be seen in the surrounding area. The teasels were cut and then dried in handel houses like the one at Darshill (see the post of 30 August) and then mounted in a simple frame. This spiky comb was then dragged accross the fabric.

The large scissors made of wrought iron, like the tool used to shear sheep, were about 3 feet in length and weighed 20-30 lbs.  Imagine the forearm strength needed to operate them accurately for a shift of ten-and-a-half hours, six days a week! The blades needed to have a razor edge which in the early days meant a blacksmith’s workshop was nearby to continually sharpen them.

Later, in the 18th century, industrial consolidation took place and a number of specialist ‘edge works’ grew up in the town; the location of some can still be seen on the late 19th century Ordnance Survey map. The foundations of one of these were exposed a few years ago in Lower Lane in the course of introducing a local flood prevention scheme. It used the power of the river to drive its sharpening and forging machinery.

Once the nap had been raised and close-cut, the cloth was ready for its makers’ seal to be attached (see blog of 31 October) and then transported to eager clients keen to receive their high-quality Shepton cloth.

We hope you have enjoyed reading this series of posts on the (simplified) stages in the manufacture of woollen cloth. Our next posts will focus more on what the heritage project discovers as we continue our research of documents and physical remains of this great industry of our town and we hope you will enjoy those too!