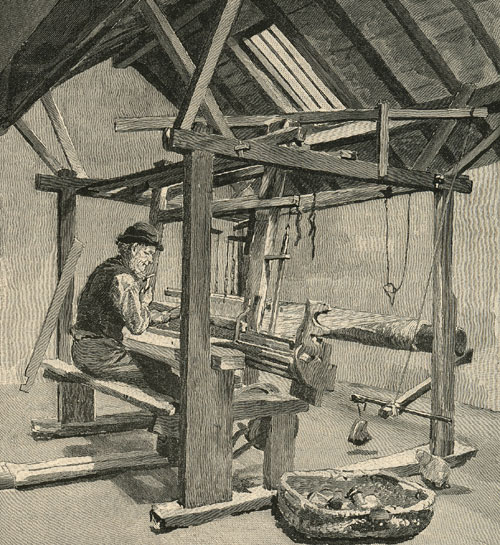 In the medieval cloth making family, the father would weave, the mother spin and the child (or one of them) would keep each of their parents working by bringing raw materials, food and drink and candles when the daylight faded. Keeping production going was vital to the household’s survival in those days, as payment was made for the completed piece of woven cloth or the weight of spun thread; a system known as piecework.

In Shepton and the surrounding villages, there were thousands of people in households like this producing the quality cloth for which the town was famous.

The looms used were able to weave the statutory width and length of the ‘piece’ of cloth: 6′ 6″ wide and a chain (22 yards) in length and a weaver might produce a handful of cloths a year. With such a family investment in a relatively small output, keeping the weaver (and the spinster) going without unnecessary breaks was essential for family survival.

Cloth is made of threads interlocked at right-angles called the warp and weft. The warp threads run the whole length of the cloth and the weft threads are woven under-and-over them on the loom. Medieval cloths in Shepton had both warp and weft of English woollen thread but around 1610 (following the end of the war with Spain in 1604), the town invented a new kind of cloth called ‘medley’ or ‘Spanish medley’ in which the warp was of English thread for strength and the weft, or a proportion of the weft, softer Spanish wool. Confusingly, some of the ‘Spanish’ wool was not from Spain, but was rather short staple wool from elsewhere in Europe. It was the short fibre length which was important.

The medley cloth proved hugely popular with buyers and was adopted by numerous other makers in Shepton and beyond.

Weaving continued to be primarily a household-based industry until the advent of steam-power in the mid-18th century which made large-scale factory-based weaving machinery a possibility.

In Shepton however, the introduction of such machinery was delayed as a result the large-scale unrest brought about in 1773 when local clothiers attempted to introduce the steam powered ‘Spinning Jenny’, leading to demonstrations involving several thousand striking workers and their families fearing for their livelihoods. However, local people in fear of their lives and property called out the local armed militia to quell the riot and two demonstrators were shot dead at Bunker Hill in Shepton.

Other factors like the volatility of food prices due to continental wars added to the industrial strife and all of the clothiers in the Shepton area refused to invest in steam power or the renewal of their operations. As a result, the local woollen mills became uneconomic and the last one closed in 1815.