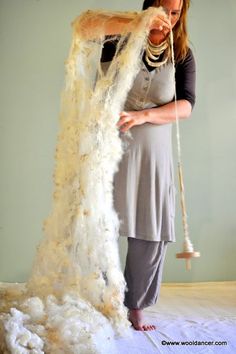 Once the wool fibres have been sorted, cleansed and carded it’s ready either for spinning, or dying before spinning (dyed in the wool). We’ll take a look at dying in a later post.

Commonly, when people today think of spinning, the image in their mind is of a woman sitting at a spinning wheel carefully drawing the carded fibres for the machine to twist into thread. The picture painted by the German brothers Grimm in their 1812 Rumplestiltskin fairy tale is responsible for that – aided more recently by the Disney film, of course!

Although common in some parts of Europe, the wheel was a more recent innovation into our country. It supplanted the more traditional method of using a drop-spindle; a simple small machine which looked something like an elongated child’s spinning top. Ea­sily transported and carried, it enabled women with a bag of woollen fibres to spin yarn almost anywhere – and keep an eye on children or the cooking pot at the same time!

A refinement was the addition of a distaff, a pole onto which the fibres were twisted into a loose clump which enabled the spinner to sit down whilst spinning. Although less portable, it made the work of turning fibres into thread far less tiring.