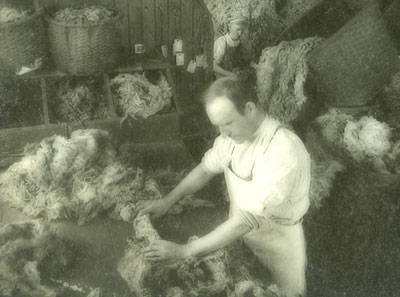 Once the sheep had been shorn, the fleeces were sorted and washed ready for carding. Sorting picked out the burrs, straw and lumps of dung and then, with fullers earth or urine and lots of manual labour, the wool was washed to remove the dirt, manure and excess oils.

After drying in the sun and wind, the tangled wool was pulled over a bed of small spikes which more-or-less lined up the individual fibres in the same direction. Sometimes, hand-held paddles were used, sometimes fixed pads, and each method was once again very labour intensive. Which of these methods was used in Shepton remains to be uncovered, but probably both were used at one time or another.

Certainly, when the town began to produce very large quantities of woollen cloth in the later middle ages, the labour demands of either method would have been huge given the likely volumes of cloth production that our researches are uncovering.

At the heart of the industry was the long staple – fibre length – of English sheep which was much prized for its durability over shorter fibre lengths, hence the country’s extremely successful international trade over many centuries.