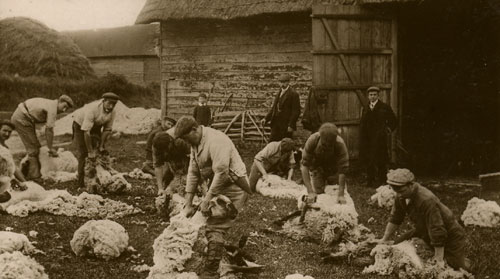 Picture this: countless thousands of sheep grazing in the fields, protected and cared for by their shepherds, effortlessly growing fleeces and gamboling happily in the open air. Such is the rather romantic vision of country life passed down to us by 18th century writers and musicians.

The reality, though, was somewhat different and each spring, after the bad weather of the winter months had passed, fleeces were shorn from the sheep.

For centuries, before the introduction of steam in the later 18th century and its later replacement with electric shearing cutters, fleeces were removed using manual tools. Shaped like a large ‘V’, the shears had two sharp passing blades and a spring to push them apart when the shearer relaxed his grip.

These men – and they probably were all men – developed very powerful shearing forearms and strong upper bodies to control and restrain the sheep as they were being sheared. A skilled shearer could remove a fleece in one piece, without nicking the sheep, in a few minutes. They were paid by the fleece so the faster they worked, the more fleeces they produced in a day, and the more they earned.

As you can see from these late 19th century photographs, shearing was a labour-intensive activity.

In the middle ages, the fleeces were largely sold intact for others outside of Shepton to manufacture into woollen cloth and we have uncovered an international treaty from 1490 dealing with the export of Somerton fleeces to the republic of Florence.

Somerset was by no means unique in this trade and many other English counties exported fleeces to various parts of Europe and beyond. So important was this trade to the economy, that the Lord Chancellor has continued to sit on the Wool Sack in the House of Lords ever since.